A video on the Lifehacker website caught my interest recently, so much so that I found myself repeating some of the content to a friend who was going for a job interview. In the video, author Ramit Sethi outlines what he calls the Briefcase Technique for use during negotiations for things like increases in salary or contract rates and so on. The technique is brilliantly simple, though perhaps more than a little gimmicky. The basic gist is you go into such negotiations totally prepared, so much so that you would be in a position to produce a document that outlines the benefits you could bring to a potential employer or client having developed an understanding of the issues facing the business and genuinely preparing a plan for how you would personally deal with those issues. The real heart of the Briefcase Technique is that you’re supposed to pull out this document (from your briefcase, hence the name) just when you get to the money negotiation section of the interview.

The Other Briefcase Technique

While the video is entertaining in an infomercial sort of way, I’m not sure how well the technique would work outside of the U.S., or outside any situation where money isn’t explicitly discussed (especially as many employers tend to make salary offers when later offering the job and don’t negotiate it during the interview – if you’re contracting that can be slightly different). However, in the video Sethi does make an interesting point about the difficulties around starting something, particularly a document that requires any form of serious creative thought.

It is often quite hard to start something. It can be very difficult to start writing a document, or to get up and start speaking, or get up and go at all, but it’s often easy to get motoring once you’ve overcome that initial resistance. The variety of different things that block our ability to get started on something (things like Blank Page Syndrome) happen to us all from time to time, but in the case of document preparation the main blockers tend to be related to trying to sift through the infinite choices of places to begin and wanting for the finished document to be perfect before we’ve even started. Regardless of the nature of the document, be it a whitepaper, presentation, spreadsheet, proposal, or whatever, we want the finished item to be the best we can make it. This is a natural desire for a professional but, perhaps surprisingly, this desire can be harmful if it holds us back.

One of the character traits that differentiate those who are regarded as naturals at IT and related fields and those who have to work at it is the ability to pull the trigger (or more likely push the button or click the mouse) in live fire situations. By that I mean, when faced with a situation like working on a customer’s production database that needs to have something potentially destructive done to it, the natural knows that, with proper backups or some other way of getting out of trouble, they can go ahead and do what needs to be done confident that they can go back if they have to. Fear of failure, as manifested by harm done to a system, holds many people back making some aspects of IT too stressful a career choice. 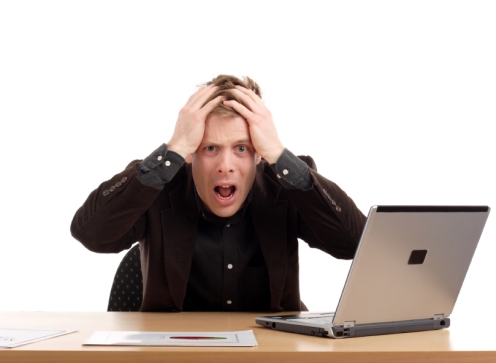 Yesterday… all those backups seemed a waste of pay.. now my data it has gone away..

Fear holds us back from lots of things and it occurred to me recently that there’s very little in the difference between being gun-shy about doing certain tasks on a customer’s system and being afraid to offer up something as a starting point in a discussion, workshop, or other people focused setting as you think your offering is not perfect or is possibly downright wrong. This parallel is especially interesting to those who might be considering a career path that amalgamates elements of traditional Information Technology and elements with more of a commercial or business focus.

For those used to working in purely technical realms who would like to move into the more business orientated areas a big difficulty to overcome can be in dealing with people more often and developing relationships deeper than merely assigning a face to the name of a user somewhere. For those used to working on complex technical subjects where they are working with a very strong focus on the task at hand, and often alone, the dealing with people thing can be a real barrier. The issue revolves around ego and the fear of making a fool of yourself. When working with a computer, if you make a mistake, you can step it back and only you and the log files need know what happened. When you are used to that your ego might not be ready for the onslaught of having people see your mistakes.

The funny thing is:

I’ve found the last point to be the most helpful when working in people focused business or technical settings. We all know that feeling of trying to get started on something but we fail to realise that everyone feels that way nearly all the time (we are, for the most part, at least a little work-shy on top of being gun-shy). This little nugget can be turned into an advantage for those who can overcome the initial resistance of creating something.

It turns out that people are naturally stingy when it comes to allocating thinking time to things, especially when they have to create something from scratch. This is referred to by the cool psychological term of being a Cognitive Miser. The Cognitive Miser in us all would rather not have to give over precious brain-time to lots of different things and are therefore glad when someone else kicks off the work, even if that person doesn’t get it completely right. People, especially busy people, are more comfortable tweaking than creating so if you are able to produce anything at all that can be used as a starting point then you are in a position to offer more to those situations then those who can’t get past the blank page, which can often be everyone else in the room. If, for example, you offer up a point in a discussion, or your documented version of a business process, that are not right then the discussion can start from why they’re not right and on to what is right. It’s far, far easier for everyone involved to critique a piece of work and fix it then it is to create something perfect from the outset.

Whether you’re writing computer code or a presentation to the board, getting started can be the highest hurdle to get over, but getting anything done at all gives the process momentum as, from then on, you’re really only tweaking. This isn’t easy, you need to apply yourself to the creative process in the first place, you need to overcome that difficulty at the start of the process, and then you need to overcome your ego’s desire to run and hide in the server room, but if you can master those three foes (and at the same time move from being a Cognitive Miser to being their cool cousin the Motivated Tactician) you might be able to develop that Business/Tech hybrid career that can offer the best challenges and opportunities.