Everything I know about career advancement I learned from watching Robocop. But I also learned a few other important things about life from other films. Some of the things I’ve learned include not to feed certain people after midnight, never to run up the stairs when you can get out the front door, never to bring a knife to a gun fight, and perhaps most importantly of all, if someone asks if you’re a god, you say yes!

Ghostbusters (1984) begins with three “scientists” Dr. Peter Venkman (Bill Murray), Dr. Ray Stantz (Dan Akroyd) , and Dr. Egon Spengler (Harold Ramis) from Columbia University in New York, investigating the sighting of a ghost at the city’s main library. Unable to do anything about the ghost and frightened away by spectre the three return to the university to discover that they are being kicked off the campus and that their research grants have been cut off. Effectively out of a job they do what most people did in the early part of the 80’s boom and decide to go into business for themselves, as paranormal investigators and eliminators using equipment they designed and built themselves.

They set up shop in a disused fire station, buy a busted up old ambulance to drive around town in, put some ads on TV, and then sit about waiting for customers. One customer does finally show up in the form of Dana Barrett (Sigorney Weaver), a classical musician who experienced some unusual goings on in the kitchen of her Central Park West apartment. The lads set about looking into her case with Peter particularly interested because he fancies Dana. A brief look about the apartment reveals nothing and Venkman finds himself kicked out after making a move on Dana.

Finally a more substantial customer calls and the boys successfully capture a ghost that had been plaguing a downtown hotel for years. News of their exploits spreads around New York and the Ghostbusters become minor celebrities as they’re inundated with work. Forced to hire some additional help they recruit Winston Zeddemore (Ernie Hudson) who joins the team but is horrified to learn that there appears to be something very wrong in the city as the level of paranormal activity is much higher than usual and the containment system used to hold the trapped ghosts is approaching capacity.

The Ghostbusters success attracts the attention of the Environmental Protection Agency who send Walter Peck (William Atherton) to investigate what the lads are up to. At the same time as Peck’s investigation develops into serious action, the disturbances in Dana’s apartment increase severely and she is attacked by something terrible but that turns out to only be the harbinger of something worse… 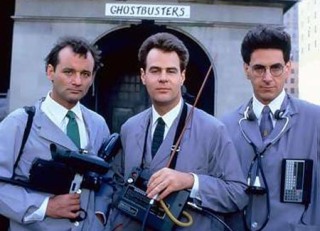 “Who you gonna call?” “GHOSTBUSTERS!” Everyone knows this movie and I’ve yet to meet someone who doesn’t love it. But right now I know that there are people reading this who are thinking “But, Ghostbusters isn’t a horror film, what’s it doing on the list?” Allow me to address that.

Ghostbusters was released with great fanfare in the UK just in time for Christmas 1984, and that was when I saw it first in the cinema. I was eight years old. For the most part, Ghostbusters is a comedy, there’s some decent humour, some great special effects, and the ghosts like the iconic Slimer, aren’t all that scary. Except for that fucking bitch ghost in the library at the beginning. 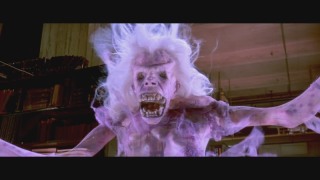 Fuck you it’s a comedy!

That library ghost was the only bit I’d look away at whenever re-watching Ghostbusters for years after, so from my point of view (and I suspect one or two other people’s) Ghostbusters managed to be a more frightening film than most of the pure horrors that have ever been released.

Its ability to scare small children aside, Ghostbusters is a wonderful film that crosses two or three big categories. Yes, it is a comedy there’s no denying that, but it also has a lot of science fiction elements, some horror bits, and some great action scenes. Twenty Eight years after I first saw this film though, the thing that really struck me about it last night what extremely down to earth, blue collar types the main characters are. At the start of the film, when the dean is kicking them out of the university he accuses Venkman of treating science like a dodge. That’s not strictly true as in the story Venkman holds PhD’s in both Psychology and Parapsychology, so he didn’t exactly dodge doing several years of work to get those. It’s more like he stayed in college because he had nothing better to do and, with the exception of Egon, that seems to be the case for them all.

At the beginning of Ghostbusters, Venkman doesn’t think the ghost catching thing will work and he’s not even convinced there is such a thing until he sees the one in the library (the scary bitch); all his work at the university revolved around ESP and such. Stantz and Spengler were genuinely interested in catching a ghost, Spengler from the research point of view and Stantz from the true believer perspective – he’s the only one at the start of the film who seems genuinely excited by and interested in the paranormal. Once they loose their university funding, they go out and start a business, not because they want to be rich but because there’s nothing else to do. All the way through the movie, all the lads are hardworking, normal blokes, with nothing special about them except their jobs, which they manage to reduce down to the level of exterminators, even though they’re each walking around with a portable particle accelerator strapped to their backs (and if you listen carefully in the dining room scene you’ll hear Venkman reveal that he knows a lot more about the Proton Pack’s operation then you’d expect!).

It’s probably a little too easy to rush to say that Ghostbusters is a good film without at least trying to be critical of it, but as I watched it there was nothing I could find that took away from it at all, no insight I could garner at the expense of anyone or anything in it. Ghostbusters stands the test of time extremely well and as such it’s not too easy to say that it’s a great film.

Two Thumbs Firmly Up for Ghostbusters.

Have you or any of your family ever seen a spook, spectre or these Links:
IMDB: http://www.imdb.com/title/tt0087332/
Wikipedia: http://en.wikipedia.org/wiki/Ghostbusters