Somewhere in South America at the start of Outpost: Black Sun (2012), a rotten old geezer is awaiting death in a nursing home, whiling away the hours playing board games and forgetting things. A young woman called Helena turns up at the home to see this particular chap, claiming to be his niece. In fact, she turns out to be some sort of bad ass there to hurry up his dying process as he’s an old Nazi who’s been hiding out for years. She baulks at actually killing him as she’s after his old boss, the uber-Nazi Klausener, who ran the concentration camp where her grand parents died. After breaking his fingers and nicking some WW2 memorabilia from him, she splits when he gives her a lead on his old manager.

Travelling to Eastern Europe on the trail of Klausener, Helena hooks up with Wallace a scientist who is on a search of his own for a certain piece of long lost German built technology from the mid-nineteen forties. The part of the country they are in has become a restricted zone and there are a large number of military personnel operating in the area from a variety of unknown nations and other organisations. At the centre of the restricted zone is the item Wallace is after which is causing a large and ever-expanding magnetic field to cover the region for several miles and is somehow creating an army of reanimated Nazi’s.

Helena and Wallace travel into the zone as far as they can before the field causes their car to conk out. Moving ahead on foot they soon start to encounter un-dead Wehrmacht types before they encounter some quite alive soldiers who are making their way towards the same machine as Wallace is after, though they’re on a mission to disable it in order to stop the hoards of zombies before they march all over Europe. 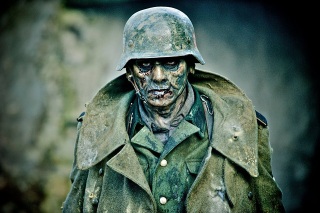 It took a while for me to run into some Nazi zombies until they finally turned up for me in the first Outpost film. Once you’ve seen a Nazi zombie or two running around the Eastern European countryside there’s only one thing you want from that point in your life onwards. More Nazi Zombies!!!! Outpost: Black Sun delivers on all fronts, and then some!

The way the story moves from the end of the first film to the start of this one is excellent. When you see the details of the magnetic field expanding all over the place you know that there’ll be zombies everywhere and they’ll be right hard to kill. This develops the action aspects of the film well and once again the military details are great, from the way the squads of soldiers move to the way they shout “contact” whenever they start shooting up the place, even down to the look of the portable EMP weapons they carry around; everything feels just right even if it’s not all that accurate or in the case of the EMP even realistic.

Just like the first Outpost, and just like any film featuring lots of soldiers (like this one for example), telling everyone apart can be a hassle and ultimately not worth the effort, it’s better for everyone to just focus on the lead characters though in Black Sun the tried and tested trick of giving the soldiers uniquely identifying traits is employed, this time the squad are all from different parts of the UK, so there’s the squad leader with an educated neutral UK accent, the semi-psycho from Scotland (who gets the best lines), and the smart arse from London (who also gets some good dialogue). In the real British army there must be whole squads of lads from roughly the same place, so here’s hoping they never do anything to deserve having a film made about them because you’ll end up with another Black Hawk Down and not have a clue what’s happening.

Nazi Zombies make for excellent villains, making the most out of two of Hollywood’s old reliable baddies. Zombies have always been hard to deal with with the traditional approach to killing them being to remove the head or put a bullet through what’s left of the brain. In the Outpost movies the zombies have an electromagnetic aspect to them so there’s the added problem of needing to deal with that somehow, which is a nuisance to be sure but not insurmountable. What bothers me about the Nazi Zombies in both the Outpost films is that, when confronted with them, no-one tried pretending to be German, or a Nazi. If these guys are Nazi’s first, which they seem to be as they’re following a command structure, then surely if you could convince them you were on their side they should leave you alone, or at worst detain you for questioning? If these buckaroos are zombies first and foremost then that was a pretty stupid plan for continuing the Thousand Year Reich, even for Nazi’s, the masters of stupid fucking plans.